RELICS #4 The Meet Me In St. Louis Party Dress 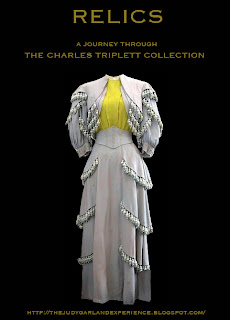 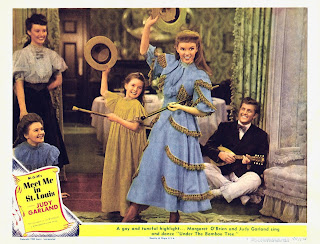 RELICS  --  The Meet Me In St Louis Party Dress

The Meet Me In St Louis party dress, designed by Irene Sharaff, has always been my favorite MGM Garland costume. Ever since the first time I saw Meet Me In St Louis in the early 1970's I was very taken with the costume and thought Judy looked so beautiful in it. For me it was the quintessential movie musical costume.

The Party Dress and scene in which Judy wore it was obviously considered to be an important part of the promotional campaign used to market Meet Me In St Louis. Images from this scene were used not only on the half-sheet poster and on one of the lobby cards, but also on numerous 8x10 stills from the party scene and cakewalk dance.

As I did more research and study of Judy Garland's career I became aware of the fact that this costume had been sold at the 1970 MGM auction and purchased by Debbie Reynolds. Many years later when I was helping her son, Todd Fisher, identify several Garland costumes I brought up the party dress and told him it was my favorite Garland costume. He replied that it was also his mother's favorite Garland costume and that he knew she would never part with it. With that statement I knew I would never even get a chance to own it although around 2007 she and Todd Fisher did offer it to a collector for $200,000. 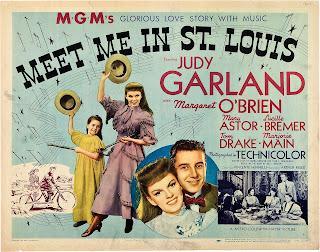 In the intervening years Miss Reynolds' dream of a museum was never to be and in 2011 she decided to sell her collection. Movie fans and costume collectors all knew this would be the sale of the century.  The handful of Garland costume collectors knew of my interest in the piece and graciously allowed me to bid without any competition from them.

The auction took 12 hours and most of the prices were astronomical but luckily for me I was able to acquire the party dress for just slightly over the estimate. It was the "icing on the cake" for the Judy Garland Charles Triplett Collection. The 3 major Judy Garland costume collectors were, I think, just as thrilled as I was that I was able to get it. 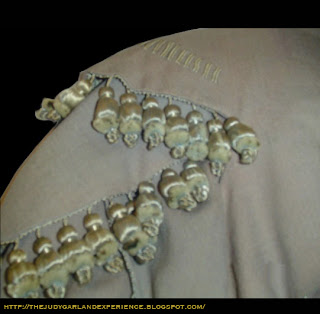 The dress is made of wool crepe and has three elements: the jacket, blouse, and skirt. The silk blouse is attached to the skirt. The careful detailing on this garment is a great part of its charm ... it has not only some beautifully applied design elements, but also the over 300 original silk tassels. Each tassel is finished with a florette at the bottom instead of loose fringe, and all the original tassels remain on the garment. Miss Garland's name is inscribed inside both the jacket and the skirt. 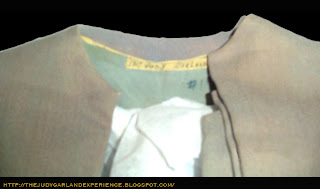 Miss Reynolds had taken great care of the costume and it was in very nice stable condition. The bright blue color seen with the Technicolor camera had faded, however this is very common for bright blue dye that is 70 years old. The costume today still holds the magic and beauty that Irene Sharaff and Vincente Minnelli envisioned. So when you watch the movie please know that the costume is safe and sound in acid free storage in North Carolina. 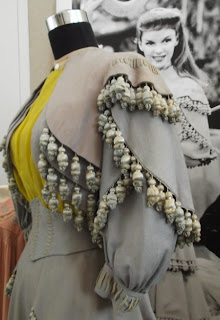 I would like to publicly thank Daniel for asking me to do this series of articles on items from my collection. I hope he knows how much I sincerely appreciate his faith in me  He really felt I had something worthwhile and of interest to share.  . Also I would like to thank Tom Larro and David Price for their invaluable input on this 6 month project.   Because of limitations on my time I have decided to make this my final installment of Relics. 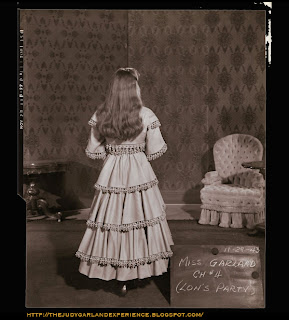 Editor's Note: We at TJGE feel privileged that Charles Triplett agreed to share these looks into his legendary collection with us. His participation has made this blog a better one, and now that he has raised the bar for us we hope to meet it and exceed it as we go forward.
And although we knew the RELICS series was going to be a limited one, it is with a heavy heart that we publish it's final edition.
But no worries for the Charles Triplett fans, as Mr. Triplett will continue to share photos and occasional reportage on this blog. In fact, he recently approached your editor with an idea for a story and photo layout that will excite Garland an Oz fans alike.
We thank you, Charles Triplett, for what you have done, and for what you continue to do for The Judy Garland Experience and for the entire Judy Garland fan/collector community.

Posted by Buzz Stephens at 8:10 PM

Thank you so much Charles. I enjoyed readying your detailed story of how you have tracked this dress down all the way back to the 1970 MGM auction. I see you announce it's your last installment. Have I missed the others? What other ones have you posted? Again, many thanks for sharing your collection with us.

Hi Tracy!
Just type "relics" into the search box in the upper lefthand corner of the blog page and it will bring up all of Charles' features in the series.

love vintage from the past!
definitely love your blog!

You may enjoy knowing the costume kept being used by Irene Sharaff, and was featured in Hello, Dolly! worn by a "townsperson" and dancer, Rutanya Alda in the scenes filmed in Garrison, New York (pretend "Yonkers") in June, 1968.