HOLD ON TO YOUR HATS, FOLKS, SHE'S GONNA SING 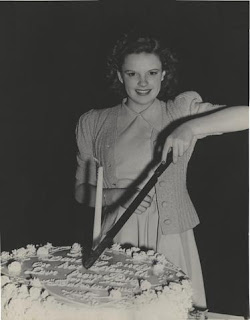 The summer of 2011 is really going to be the summer of Judy Garland. As announced here earlier there is an important new CD set of Judy's Abbey Road recordings coming out:The London Studio Recordings 1957-1964. 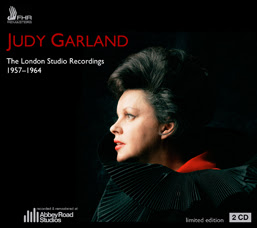 There is a new book coming out by the world's foremost authority on Judy Garland: JUDY A Legendary Film Career. 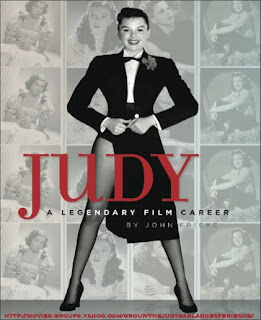 And we are so pleased and proud to announce Film Society Of Lincoln Center's ALL SINGIN', ALL DANCIN', ALL JUDY! 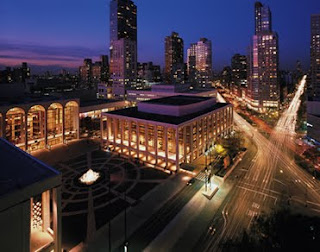 Impressive retrospective of Judy Garland’s films will feature 31 titles including a presentation of seldom seen short films and rarities as well as a special “sing-along” screening of THE WIZARD OF OZ.

First comprehensive retrospective of Garland’s television appearances highlighted by The Judy Garland Show as well as performances on The Ed Sullivan Show and The Tonight Show, among others

New York, NY, June 10, 2011. On the occasion of what would have been Judy Garland’s 89th birthday, the Film Society of Lincoln Center and The Paley Center have announced the details today for FSLC’s comprehensive retrospective of the peerless film icon’s work, All Singin’, All Dancin’, All JUDY! which will screen at the Walter Reade Theater July 26 – August 9 and The Paley Center’s comprehensive retrospective of Garland’s television work, JUDY GARLAND: THE TELEVISION YEARS which will be presented July 20 – August 18.

With autumn marking the 75th anniversary of Judy Garland's feature film debut (PIGSKIN PARADE, 1936), the Film Society of Lincoln Center will screen 31 titles from July 26 – August 9, including each of her big-screen acting performances, to pay tribute to the incomparable talent known as Judy Garland. All but two films will be presented in 35mm, with the two exceptions (THE WIZARD OF OZ and A STAR IS BORN) presented in stunning 4k digital restorations.

All Singin’, All Dancin’, All JUDY! will mark the first-ever United States celebration of Judy Garland’s movies to be presented by an arts organization of this kind as well as being the most complete and comprehensive retrospective of her films since the London National Film Theatre’s program 40 years ago in 1971. 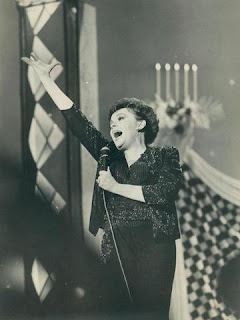 The program will be coordinated with and produced in association with The Paley Center, which will present the first comprehensive retrospective of Judy Garland’s television work called JUDY GARLAND: THE TELEVISION YEARS from July 20 – August 18. In addition to highlights from The Judy Garland Show, which allowed her to share the spotlight with such entertainers as Mickey Rooney, Barbra Streisand, Ethel Merman, and Peggy Lee, the screening series will include rarely shown guest spots Garland did on such programs as The Ed Sullivan Show, The Tonight Show, The Sammy Davis Jr. Show, On Broadway Tonight, and The Jack Paar Program. For more information go to www.paleycenter.org. 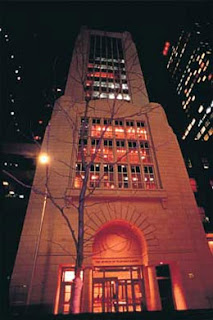 Highlights of the films being screened at the Walter Reade Theater (165 West 65th Street, between Amsterdam Avenue and Broadway) will include; a sing-along screening (co-presented with NewFest) of THE WIZARD OF OZ (1939); screenings of the Andy Hardy classics that teamed Garland with Mickey Rooney (LOVE FINDS ANDY HARDY (1938), ANDY HARDY MEETS DEBUTANTE (1940) and LIFE BEGINS FOR ANDY HARDY (1941)); classic and beloved musicals (MEET ME IN ST. LOUIS (1944) and EASTER PARADE (1948)); and her Academy Award nominated performances in A STAR IS BORN (1954) and JUDGMENT AT NUREMBERG (1961). 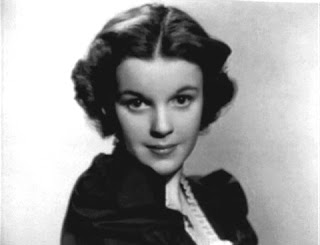 Another highlight will be a presentation of short films and rarities hosted by noted Judy Garland and THE WIZARD OF OZ authority, historian and author, John Fricke on Friday, July 29 at 7:30PM. An Emmy winner and Grammy nominee for his work on various Garland-based documentaries and recordings, Fricke will be on hand throughout the retrospective to discuss and add insight into the film legend’s career. He is an author of several books on the subject of Garland, THE WIZARD OF OZ and L. Frank Baum (the author of The Wizard of Oz), and will be signing copies of his latest book published by Running Press, JUDY: A Legendary Film Career on Friday, August 5 at the Walter Reade.

FSLC Program Director Richard Pena said, “The idea for this series occurred to us when we were presenting the restoration of THE WIZARD OF OZ at the NYFF in 2009. In discovering the amazing number of web sites, festivals and fan clubs still devoted to Judy Garland, it was clear that she is still very much alive and part of our culture. Working with John Fricke, we have been able to assemble an unprecedented panorama of her work. We’re delighted to give Judy Garland fans and New York film goers an opportunity to see one of the truly magical screen icons up on the big screen, where she belongs.”


FILM LINEUP FOR All Singin’, All Dancin’, All JUDY!

BABES IN ARMS (90min) (1939)
Director: Busby Berkeley
Children of fading vaudevillians reclaim their families' honor by putting on a show in the barn. Rooney and Garland! Arthur Freed’s first film as head of his own MGM unit! (35mm)
BABES IN ARMS screens Thursday, July 28 at 1:00PM and Monday, August 1 at 6:15PM. 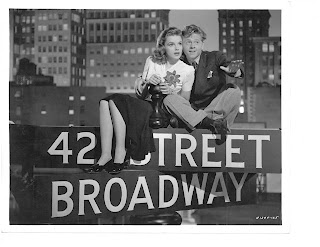 BABES ON BROADWAY (118min) (1941)
Director: Busby Berkeley
A group of aspiring New York performers surmounts all the odds in their efforts to stage a benefit for inner-city children. Rooney and Garland! (35mm)
BABES ON BROADWAY screens Thursday, July 28 at 3:00PM and Monday, August 1 at 8:15PM.

A CHILD IS WAITING (102min) (1963)
Director: John Cassavetes
A rootless musician (Garland) seeks stability as a teacher for challenged children, but her emotionalism is deemed counterproductive by the school psychiatrist (Burt Lancaster). (35mm)
A CHILD IN WAITING screens Sunday, August 7 at 8:40PM and Monday, August 8 at 4:15PM.

EASTER PARADE (107min) (1948)
Director: Charles Walters
“The happiest musical ever made” (per the original ad copy): 17 Irving Berlin songs and the only screen teaming of Garland and Astaire. (35mm)
EASTER PARADE screens Friday, August 5 at 6:00PM and Monday, August 8 at 2:00PM.

FOR ME AND MY GAL (104min) (1942)
Director: Busby Berkeley
Vaudevillians encounter romantic challenges and World War I in their hopes of crashing “the big time”: The Palace Theatre in New York City. (Print courtesy of the Academy Film Archive.) (35mm)
FOR ME AND MY GAL screens Thursday, August 4 at 6:15PM.

I COULD GO ON SINGING (100min) (1963)
Director: Ronald Neame
While appearing at the London Palladium, a legendary singer (Garland) hopes to rekindle an old love (Dirk Bogarde) and reunite with their illegitimate son. Garland’s final film. (35mm)
I COULD GO ON SINGING screens Sunday, August 7 at 6:30PM and Tuesday, August 9 at 3:45PM.

THE PIRATE (102min) (1948)
Director: Vincente Minnelli
Cole Porter wrote the songs for this tongue-in-cheek romp about a Caribbean girl (Garland) in love with the legend of a ruthless seaman (Gene Kelly). (35mm)
THE PIRATE screens Tuesday, July 26 at 4:00PM and Saturday, July 30 at 5:30PM. 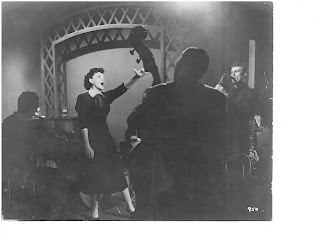 A STAR IS BORN (181min) (1954)
Director: George Cukor
A band singer (Garland) is touted to Hollywood stardom by an alcoholic film legend (James Mason), but their evolving love is undercut by the industry’s machinations. (DCP)
A STAR IS BORN screens Sunday, July 31 at 7:30PM, Friday, August 5 at 2:15PM and Tuesday, August 9 at 8:15PM.

STRIKE UP THE BAND (120min) (1940)
Director: Busby Berkeley
Midwestern teens fight all the odds to get their high school swing band to Chicago for a radio contest. Rooney and Garland! (Preservation print courtesy of the Academy Film Archive.) (35mm)
STRIKE UP THE BAND screens Friday, July 29 at 6:00PM and Wednesday, August 3 at 1:30PM. 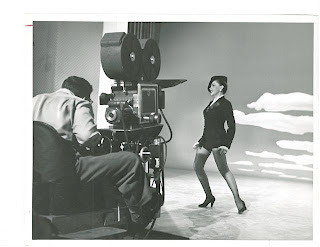 SUMMER STOCK (108min) (1950)
Director: Charles Walters
A Connecticut barn becomes a summer theater, thanks to its singing/dancing owner and the performing troupe of a New York actor/director. (35mm)
SUMMER STOCK screens Saturday, August 6 at 6:10PM and Tuesday, August 9 at 1:30PM.

THE WIZARD OF OZ (101min) (1939) – Co-presented by NewFest
Director: Victor Fleming
A Kansas girl travels with a Scarecrow, Tin Man, Lion (and Toto, too) through the magical, musical land of Munchkins, witches, and the Wonderful Wizard. (35mm – Regular version) (DCP – Sing-along version)
THE WIZARD OF OZ screens Saturday, July 30 (Sing-along version) at 11:30AM and Wednesday, August 3 (Regular version) at 4:00PM.


Tickets will go on sale Thursday, May 5 both at the box office and on-line. Discounts are available for Film Society members. Read more about The Film Society of Lincoln Center.

Screenings will be held at the Film Society of Lincoln Center's Walter Reade Theater, located at 165 West 65th Street, between Amsterdam Avenue and Broadway.


SCREENING SCHEDULE FOR All Singin’, All Dancin’, All JUDY!


About the Film Society of Lincoln Center
The Film Society of Lincoln Center was founded in 1969 to celebrate American and international cinema, to recognize and support new directors, and to enhance the awareness, accessibility and understanding of film. Advancing this mandate today, the Film Society hosts two distinguished festivals. The New York Film Festival annually premieres films from around the world and has introduced the likes of François Truffaut, R.W. Fassbinder, Jean-Luc Godard, Pedro Almodóvar, Martin Scorsese, and Wong Kar-Wai to the United States. New Directors/New Films, co-presented by the Museum of Modern Art, focuses on emerging film talents. Since 1972, when the Film Society honored Charles Chaplin, its annual Gala Tribute celebrates an actor or filmmaker who has helped distinguish cinema as an art form. Additionally, the Film Society presents a year-round calendar of programming at its Walter Reade Theater and offers insightful film writing to a worldwide audience through Film Comment magazine. For more information, visit: www.FilmLinc.com


The Film Society receives generous, year-round support from 42BELOW, American Airlines, the New York Times, Stella Artois, the National Endowment for the Arts, and the New York State Council on the Arts.

About The Paley Center
The Paley Center for Media, with locations in New York and Los Angeles, leads the discussion about the cultural, creative, and social significance of television, radio, and emerging platforms for the professional community and media-interested public. Drawing upon its curatorial expertise, an international collection, and close relationships with the leaders of the media community, the Paley Center examines the intersections between media and society. The general public can access the collection and participate in programs that explore and celebrate the creativity, the innovations, the personalities, and the leaders who are shaping media. Through the global programs of its Media Council and International Council, the Paley Center also serves as a neutral setting where media professionals can engage in discussion and debate about the evolving media landscape. Previously known as The Museum of Television & Radio, the Paley Center was founded in 1976 by William S. Paley, a pioneering innovator in the industry. For more information, please visit www.paleycenter.org.