NEW FILES POSTED TO THE YAHOO EXPERIENCE (for the week of August 21, 2011) 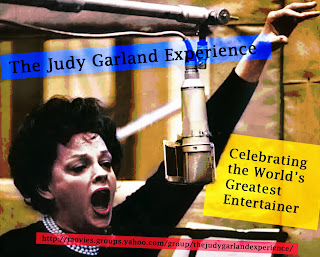 A JUDY MOMENT
Judy is keeping an eye on the clock.

BING AND ROSIE # 390
Another entry in our seemingly endless supply of episodes from Bing Crosby and Rosemary Clooney's morning radio show. This edition was originally broadcast on August 28, 1961.

DUET OF THE WEEK
Tony Bennett and Liza Minnelli sing a song written for Kaye Ballard.

ENCORE
Judy takes a Sophie Tucker classic and shakes the dust off of it. Then she takes it home and puts it to bed.

JUDY GARLAND IN CONCERT
Per a request, here are Judy Garland and friends as recorded at the Greek Theater on September 14, 1965. Also featuring Mickey Rooney, Martha Raye, and Johnny Mathis.

REQUESTS
Get Off Looking Good (AKA The Lonely Stage). Judy sings an a capella version of this song proposed by her team for her to sing in Valley Of The Dolls.

WHERE JUDY PLAYED
The Animals on the Ed Sullivan Show.
Posted by Buzz Stephens at 11:44 AM